Getting back on track.

It's been eight months since I last blogged about SeaRose.
You know. The exhaustion thing.
Blah.

This is not only true for code, but for any project you return to after a long time.

So. After half an hour of searching through folders on my computer and external storage drives, I found seven folders that had something to do with SeaRose.
Three of those were labeled 'BU' and contained various versions of backed up code and art files. The others were labeled 'new/searose/', 'searose/', 'searose_a/', and 'games/searose/'. And they all had code files in them that had been changed around the same time.
Oh horror.

Next, I tried to find the various pieces of art I had been working on.
I remember distinctly having worked on 4 backgrounds.
And I also remember 'cleaning up' my computer and trashing some '_tmp' folders on my desktop.

As the panick started to rise and I had only recovered 3 clearly -in progress- backgrounds, I opened the last unchecked folder, aptly named 'new/searose/_arch/'.
And there they were : the 'good_ones' !
Pjjjewww. 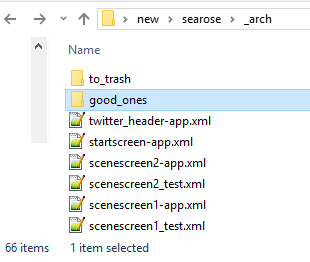 Two hours later, I had my game art neatly organized into 4 folders. The extra '_jnk' folder contains files that are obviously outdated, but that I'm too scared to trash, and the '_arch' folder is hiding all the files that I don't know what to do with (only 38 items). 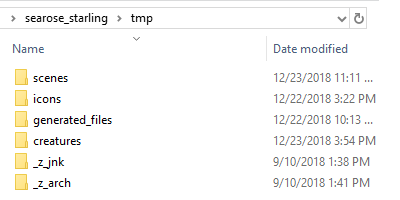