Shortly after I started working on SeaRose, I noticed a big problem with the Starling framework I was using:


Somehow, mouseOver and mouseClick events happened even when the mouse was over transparent pixels ! Obviously, that's not what I wanted.

This behvior puzzled me because it is not what I had seen before, with ActionScript and OpenFL ...

As it turns out, it has something to do with hardware acceleration and the GPU.
I'm not going to pretend I completely understand all of this, but it seems that in de Olden Days, images were handled by the CPU. Since the CPU has access to the individual pixels of an image, it knows if a pixel is transparent or opaque. Because collisions and touch (mouse) events can only happen over opaque pixels, you get automatic pixel-perfect touch and collision.
Nowadays, more and more game development libraries let the GPU handle the graphics. Most of the time, this will result in a much better performance for the game. A side effect however, seems to be that once an image has been loaded into the GPU memory, one can no longer access the individual pixels of the image (in the Starling library ; I don't know about other hardware accelerated libraries). Therefore, one has no way of knowing if an individual pixel is opaque or transparent. So, touch and collision events have to be calculated based on the width and height of the image (the bounding box). Most of the time, and for most types of games, this isn't a problem. But for hidden object games it obviously is.

As a game developer, you now have several options :


My own solution is a bit different.
Since I have a lot of images on screen at the same time, I wanted something simple. I also realized that I didn't need 'pixel perfect' touch events, but something in between pixel-perfect and bounding box : polygons !
Let me show you what I mean :

As you can see, the polygon is much closer to the real shape of the whale, but still, it only consists of fourteen lines (or fourteen vertices). You can make the polygon more (or less) complex, depending on the needs of your game. Just remember that 'less is more' in this case !
Here you can see the effect of the polygon (as opposed to the bounding box in the first clip) :


Perfect for a hidden object game ! =)

This is how I implemented the polygon idea (sorry, it's a rather long read).

First, I create the art for the game (any software). Whales, in this case.
Next, I import the art (file.png) in a drawing program that can create SVG images (eg/ Inkscape). I add a new layer with the same size as the original image, and draw the polygon for each whale. I try to make sure that the width and height of the polygon and whale are as similar as possible. This way, the midpoints of the polygon and the whale will also be the same (makes it easier to code).
When you're happy with everything, save ONLY the polygon layer as an SVG image. If everything goes well, you should be able to open the file with eg/ Notepad++ (it's basically an XML-file). 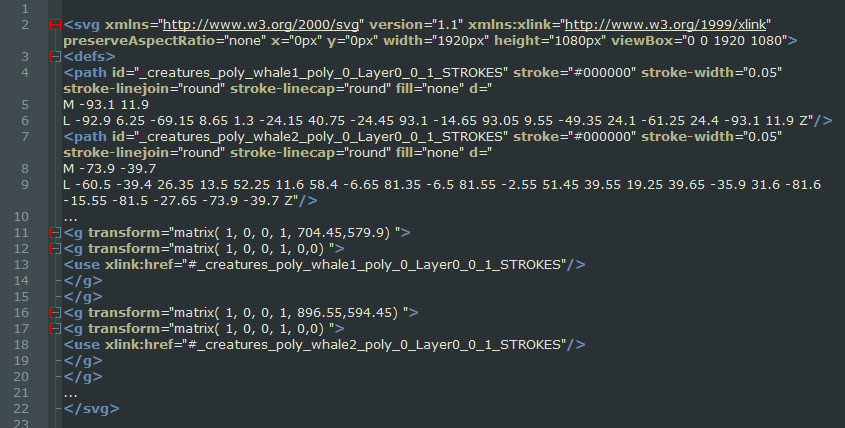 The SVG data may look a bit intimidating at first, but don't worry, it's not that complicated. Honest. =)
We're only interested in the stuff inside <path id='name' d='vertices'/> : the name of the image (or subtexture) and a list of the vertices (points that make up the polygon).
The info inside the 'd' attribute has two parts. The first part ('M' : move to) defines the starting point of the polygon, and the second part ('L': line to -> 'Z' : close path) defines the path (the sides of the polygon).
The <g transform='matrix'> elements at the bottom of the file have information about the x, y, rotation, and scale of the polygons. We don't need it.

Since I don't want to process the SVG file when someone is playing the game, I wrote a tiny program to extract the info from the SVG file and store it as a byteArray that will be read when the game starts.
This is the pseudo-code :

The code that I used to check if a polygon is CW or CCW, is based on information I found on StackOverflow. The method is called 'Sum over edges' : (x2 − x1)(y2 + y1), and it works even for convex shapes (like the whales). It says that if the result of the calculation is positive, the polygon is CW in a NORMAL Carthesian coord system (0,0 at bottom left). Most game code however defines (0,0) at the top left of the screen, so, the result has to be reversed (negative = CW) !
The pseudo-code for the function 'check_if_cw(verts_one_polygon)' looks like this :

It's now very easy to convert all CCW polygons to CW polygons. This is the pseudo-code :

Once I have the SVG polygon data stored in a byteArray, it's easy to use the polygons in the game code.
I use a class 'HiddenObject' to combine each non-clickable texture (whale) with their matching, clickable polygon.